Ecumenical Patriarch Bartholomew: THE WORLD AS SACRAMENT. The Theological and Spiritual Vision of Creation 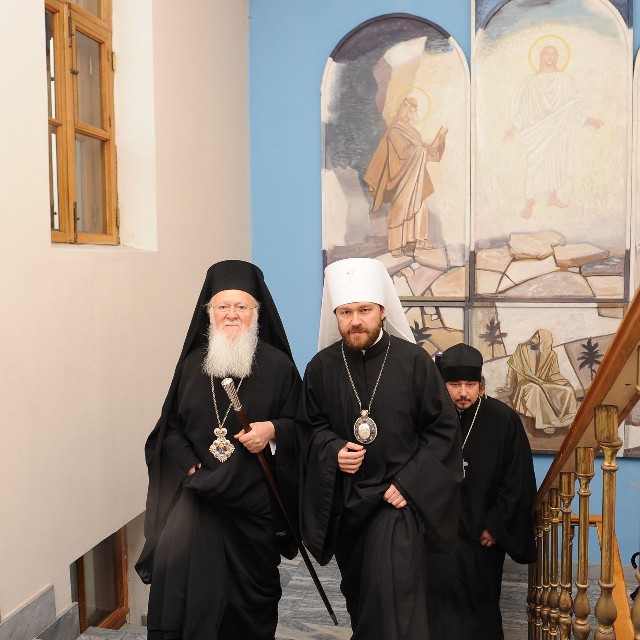 Introduction: Creation and the Virtue of Silence
In the Philokalia, St. Anthony of Egypt describes nature as a book that reveals the beauty of God’s creation: “Creation [he says] declares in a loud voice its Maker and master.” Or, as St. Maximus the Confessor claims in the 7th century, the whole world is a “cosmic liturgy.” What, then, is the Orthodox theological and spiritual vision of the world?
As a young child, accompanying the priest of our local village to remote chapels on our native island of Imvros in Turkey, the connection of the beautiful mountainside to the splendor of God was evident. The environment provides a panoramic vision of the world, like the wide-angle lens of a camera, which prevents us from exploiting its natural resources in a selfish way. The recent ecological disaster off the Gulf Coast in Louisiana reveals the consequences of ignoring this cosmic worldview.
However, to reach this point of maturity toward the natural environment, we must take the time to listen to the voice of creation. If we are silent, we shall experience what the Liturgy of St. James affirms:
The heavens declare the glory of heaven; the earth proclaims the sovereignty of God; the sea heralds the authority of the Lord; and every creature preaches the magnificence of God.
It is unfortunate that we lead our life without noticing the environmental concert that is playing out before our eyes and ears. In this orchestra, each minute detail plays a critical role. Nothing can be removed without the entire symphony being affected. No tree, animal or fish can be removed without the entire picture being distorted, if not destroyed. 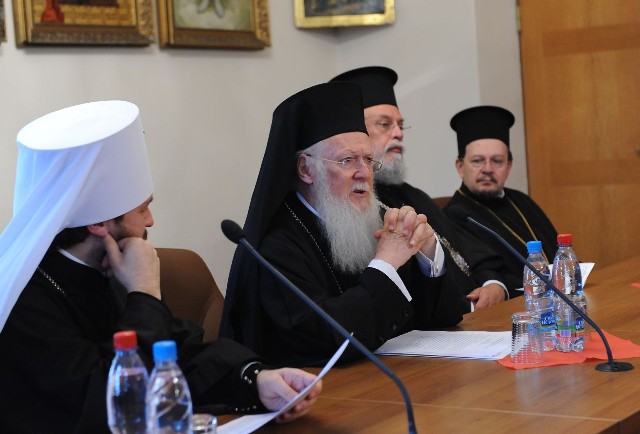 Orthodox Theology and the Environment
In its foremost symbol, the Nicene-Constantinopolitan Creed, the Orthodox Church confesses “one God, maker of heaven and earth, and of all things visible and invisible.” From this fundamental principle and declaration of faith, the Orthodox Church articulates the concept of cosmic transfiguration, especially through its hymnography. The Feast of Christ’s Transfiguration on August 6th highlights the integral connection between metamorphosis and theophany, extending the divine light and transformative power to all creation:
Today, on Mt. Tabor, in the manifestation of your light, O Lord, You were unaltered from the light of the unbegotten Father. We have seen the Father as light, and the Spirit as light, guiding with light the entire creation.
And the Feast of our Lord’s Baptism on January 6th proclaims:
The nature of waters is sanctified, the earth is blessed, and the heavens are enlightened … so that by the elements of creation, and by angels, and by human beings, by things both visible and invisible, God’s most holy name may be glorified.
The breadth and depth of the Orthodox cosmic vision implies that humanity is a part of a “theophany,” which is always greater than any single individual. As St. Maximus states: “Human beings are not isolated from the rest of creation. They are bound by their very nature to the whole of creation.” Thus, in The Brothers Karamazov, Dostoevsky urges:
Love all God’s creation, the whole of it and every grain of sand. Love every leaf, every ray of God’s light. Love the animals, love the plants, love everything. If you love everything, you will perceive the divine mystery in things. 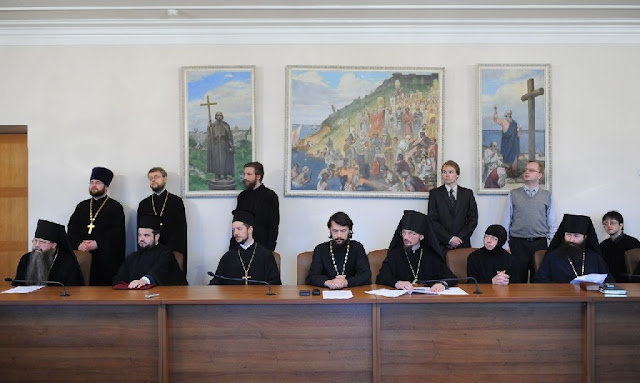 Eucharistic and Ascetic Spirituality
In order to achieve this sacramental vision of creation, human beings are called to practice a spirituality of thanksgiving and self-discipline. In theological terms, we are called to be “eucharistic” and “ascetic” beings. In this way, the Orthodox Church reminds us that creation is not simply our possession or property, but rather a gift from God the Creator, a gift of wonder and beauty. From the moment of creation, this world was offered by God as a gift to be returned in gratitude and love.
This is precisely how the Orthodox spiritual way avoids the problem of the world’s domination by humanity. For if this world is a sacred mystery, then this in itself precludes any attempt at mastery by human beings. Indeed, the mastery or exploitative control of the world’s resources is identified more with Adam’s “original sin” than with God’s wonderful gift. It is the result of selfishness and greed, which arise from alienation from God and an abandonment of the sacramental worldview. Sin separated the sacred from the secular, dismissing the latter to the domain of evil and surrendering it as prey to exploitation.
Beyond a “eucharistic” spirituality, we are also called to practice an “ascetic ethos,” namely self-restraint and self-control, so that we no longer willfully consume every fruit, but instead manifest a sense of frugality from some things for the sake of valuing all things. Then, we shall learn to care for plants and animals, for trees and rivers, for mountains and seas, for all human beings and the world. Then, we shall be instruments of peace and life, not tools of violence and death. Then, everything will assume its divine purpose, as God originally intended the world. 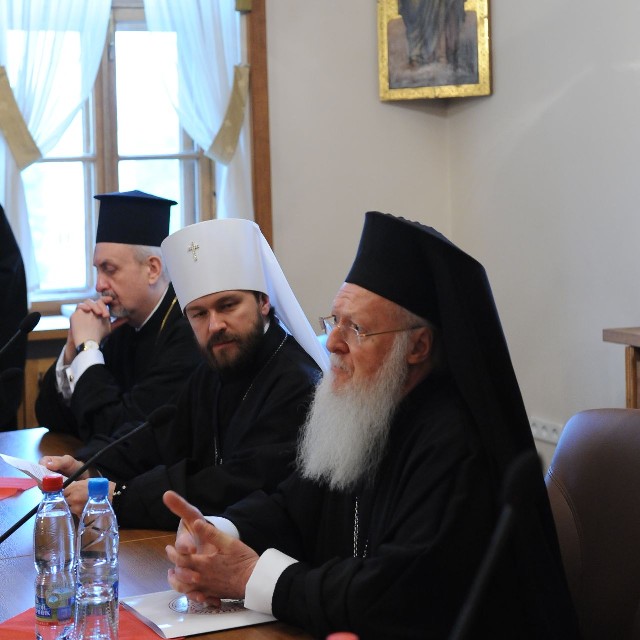 Creation and the Virtue of Compassion
On the sixth day of creation, God created man and woman in His divine image and likeness. Yet, what most people overlook is that the sixth day is not dedicated to the formation of Adam alone. That sixth day was shared with “living creatures of every kind; cattle and creeping things and wild animals of the earth.” (Gen. 1.24) This close connection between humanity and the rest of creation is a powerful reminder of our intimate relationship with the environment. While there is undoubtedly something unique about our creation in God’s image, there is more that unites us than separates us, not only as human beings but also with creation. It is a lesson we have learned the hard way in recent decades.
The saints of our Church understood this well. They knew that a person with a pure heart was able to sense the connection with the rest of creation, including the animal world. The connection is not merely emotional; it is profoundly spiritual, providing a sense of continuity and community as well as an expression of identity and compassion with all of creation. One may recall St. Seraphim of Sarov feeding the bear in the forests of the north. As Abba Isaac of Nineveh observed:
A merciful heart burns with love for all creation: for human beings, birds, beasts, even demons – for all God’s creatures. When it recalls these creatures, it is filled with tears. An overwhelming compassion makes the heart grow small and weak, and it cannot endure to hear or see any suffering, even the slightest pain, inflicted upon any creature. 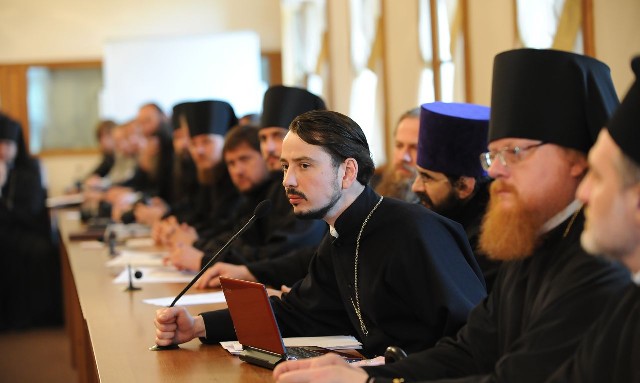 Interpreting the Concept of Sin
If the earth is sacred, then our relationship with the natural environment is sacramental. The “sin of Adam” is precisely his refusal to receive the world as a gift of communion with God and with the rest of creation. St. Paul clearly emphasizes the consequences of the Fall, claiming that “from the beginning till now, the entire creation, which as we know has been groaning in pain” (Rom. 8.22), also “awaits with eager longing this revelation by the children of God.” (Rom. 8.19)
However, far too long have we focused – as churches and as theologians – on the notion of sin as a rupture in individual relations with each other or with God. The environmental crisis reminds us of the cosmic consequences of sin, which are more than merely social or narrowly spiritual. Every act of pollution is an offence against God as creator. Repentance implies a radical change of ways and worldview. Some fifteen years ago, at a conference in Santa Barbara, we declared:
To commit a crime against the natural world is a sin. To cause species to become extinct and destroy the biological diversity of God’s creation; to degrade the integrity of the earth by causing climate change; to strip the earth of its natural forests or destroy its wetlands; to contaminate the earth’s waters – all of these are sins. 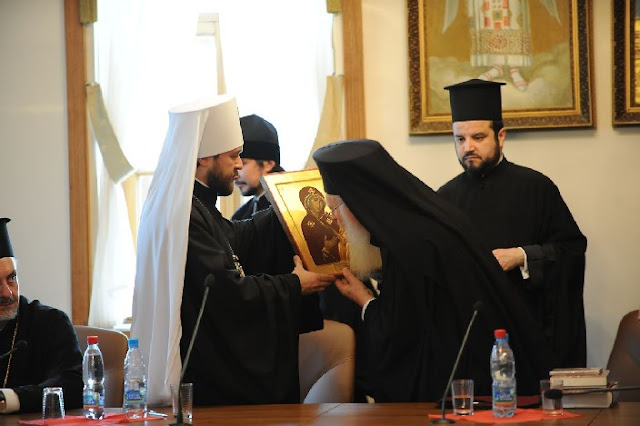 Social, Political, and Economic Implications
Orthodox theology recognizes the natural creation as inseparable from the identity and destiny of humanity; every human action leaves a lasting imprint on the body of the earth. Human attitudes and behavior toward creation directly reflect human attitudes and behavior toward other people. Ecology is inevitably related to economy; our global economy is simply outgrowing the capacity of our planet to support it. At stake is not just our ability to sustain the world, but to survive. Indeed, scientists estimate that those most hurt by global warming will be those who can least afford it. Therefore, the ecological problem of pollution is connected to the social problem of poverty; for all ecological activity is measured by its impact upon other people, especially the poor.
Concern, then, for ecological issues is directly related to concern for issues of social justice. A Church that neglects to pray for the polluted environment is a Church that refuses to offer food and drink to a suffering humanity. A society that refuses to care for human beings is a society that ultimately mistreats all of God’s creation. The terms “ecology” and “economy” share the same etymological root (from the Greek oikos), which signifies “home.” It is unfortunate and selfish that we have restricted the application of this word to ourselves, as if we were the sole inhabitants of this world. This planet is the home of everyone, of every animal creature, as well as of every form of life. 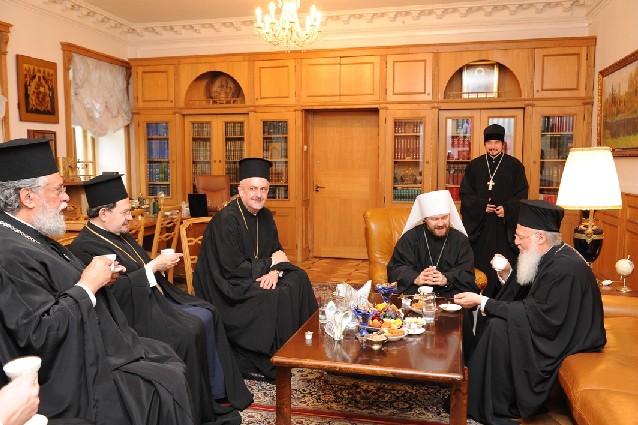 Conclusion: A New Worldview
We have repeatedly stated that the crisis that we are facing in our world is not primarily ecological. It is a crisis concerning the way we perceive the world. We are treating our planet in a selfish, godless manner precisely because we fail to see it as a gift inherited from above; it is our obligation to receive, respect and return this gift to future generations. Therefore, before we can effectively deal with problems of our environment, we must change the way we regard the world. Otherwise, we are simply dealing with symptoms, not with their causes. We require “a new heavenly” worldview if we are to desire “a new earth.” (Rev. 21.1)
This is the source of our optimism. The natural environment – the forest, water and land – belongs to all generations. Your generation is entitled to a better, brighter world; a world free from degradation, violence and bloodshed; a world of generosity and love. It is the selfless love for our children that will show us the path to the future. And it is your generation that will initiate the changes in lifestyle to secure this future.
May God bless you in this sacred struggle.
Δημοσιεύτηκε στις 2:22 μ.μ. 1 σχόλια 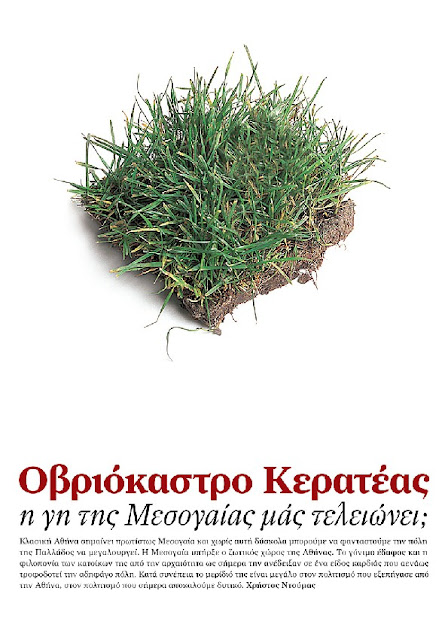 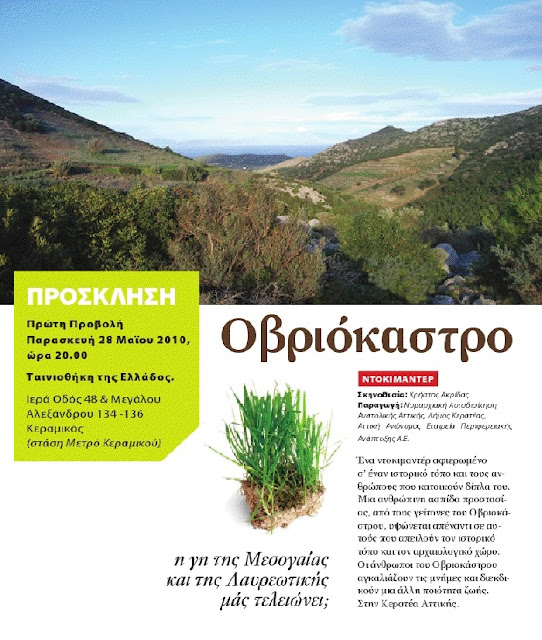 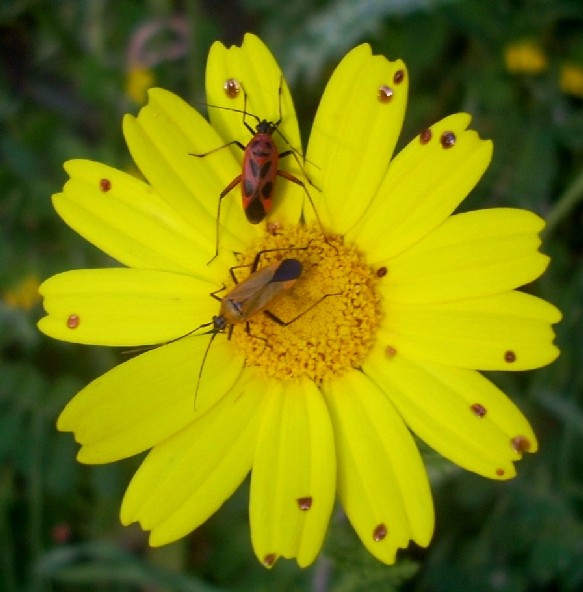 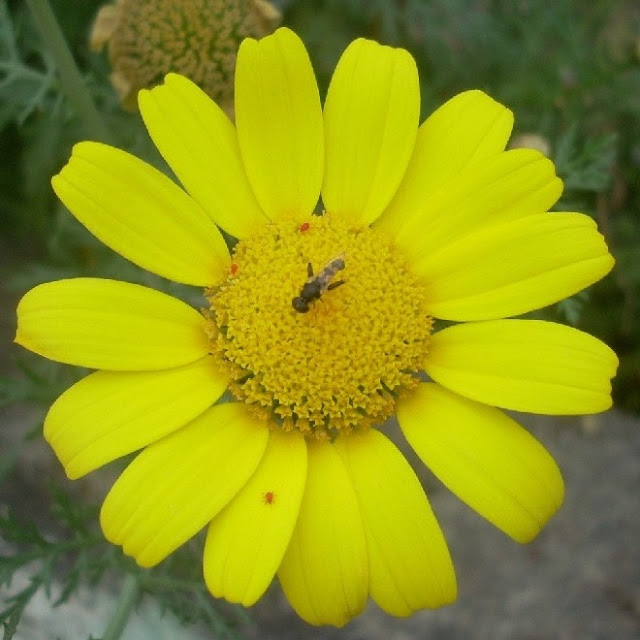 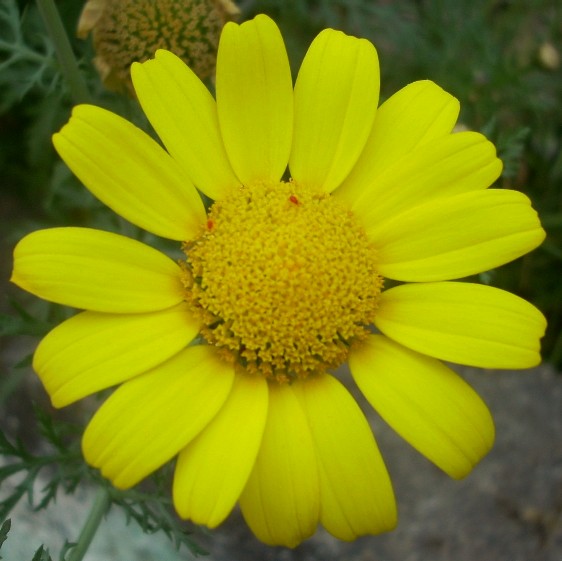 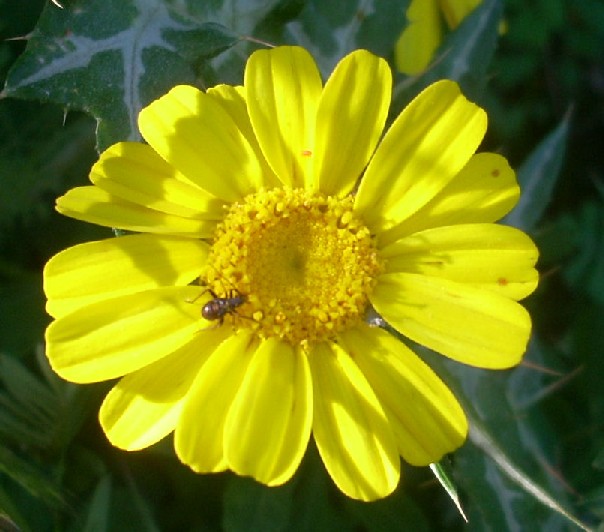 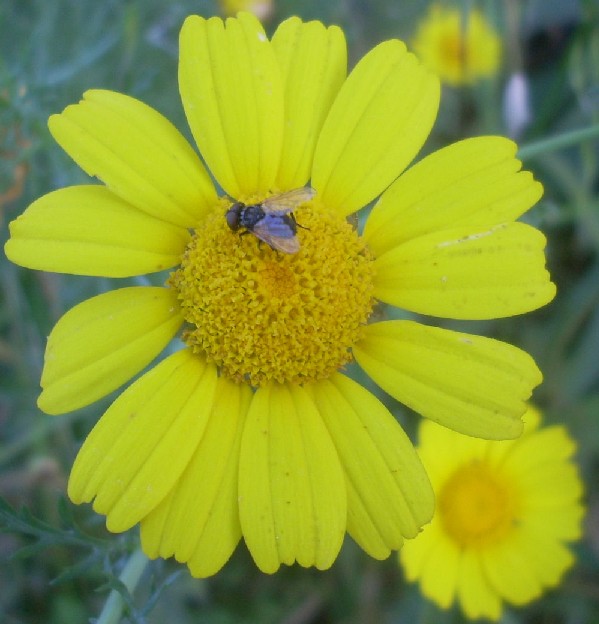