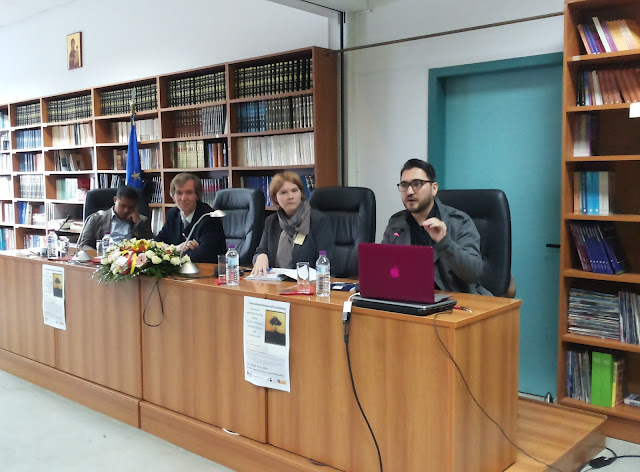 Ecotheology, Climate Justice and Food Security (ETCF) was the focus for lively discussion at a consultation event hosted by the Volos Academy for Theological Studies, in Greece on 10-13 March.
Guillermo Kerber, World Council of Churches (WCC) programme executive for Care for Creation and Climate Justice, participated in the consultation. The event in Volos is part of a wider process, in which the exploration of the theological and moral dimensions of climate change can lead to more clarified advocacy and definitive action at the grassroots level, he said. “As we explore what it means to be the church in the context of climate justice and food security, we see in an ever-vivid way the ties between climate change and the vulnerability of our neighbors.”
An online survey was the first outcome of the ETCF project, a joint initiative by the WCC, Globethics.net, Bread for the World, and United Evangelical Mission in cooperation with the Volos Academy and the Orthodox Academy of Crete.
The consultation included two keynote speakers. Prof. Ekaterini G. Tsalampouni, New Testament scholar at the Aristotle University of Thessaloniki, from the perspective of the Orthodox tradition, offered insights on challenges and dilemmas arising from eco-justice. The second keynote speaker, Prof. Ernst Conradie, professor of systematic theology at the University of Western Cape, building on the drought being experienced in Southern Africa in early 2016 and its consequences on food, energy and water, explored the various understandings of God that emerge in the context of the climate and food crises and insisted on the need for an ecological reformation of Christianity.
Contextual case studies presented by participants from the different regions shared and discussed the work being done by churches, theological institutions and ecumenical organizations.
With the Panorthodox Council to take place in Crete in June 2016 and the 500th anniversary of the Reformation to be celebrated throughout 2017, participants called to include ecotheological concerns in the programmes of these two major events.
WCC and its member churches presented messages about the importance of justice and human rights in the face of climate change at the 21st Conference of Parties of the United Nations Framework Convention on Climate Change. After the consensus of the Paris Agreement, engagement in these issues is ongoing, said Kerber. “We continue to both explore our call as Christians to care for creation in a context in which we also need equitable climate agreements worldwide.”
For the last two years, the ETCF steering committee was composed by Rev. Dr Dietrich Werner from Bread for the World, Rev. Dr Jochen Motte and Rev. Dr Andar Parlindungan from the United Evangelical Mission, Dr Stephen Brown and Rev. Viktória Kóczián from Globethics.net and Dr Guillermo Kerber from the World Council of Churches.
WCC Care for creation and climate justice
http://www.oikoumene.org/en/press-centre/news/theology-and-climate-change-focus-of-consultation
Δημοσιεύτηκε στις 9:07 μ.μ.