THE ROLE OF FAITH FOR A COHESIVE AND SUSTAINABLE WORLD 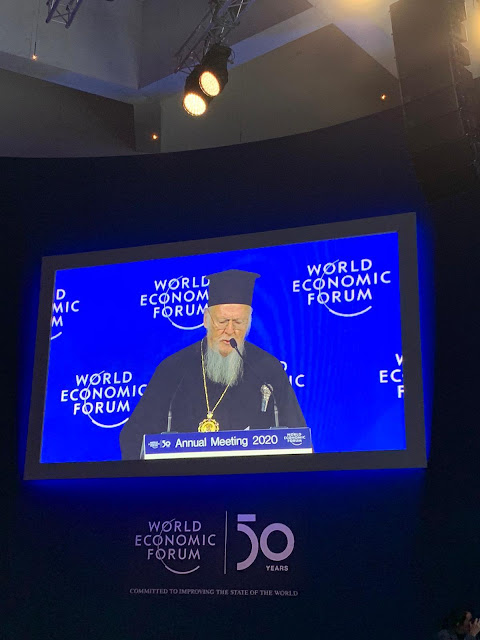 It is an honor to address this important event organized by the World Economic Forum with a special emphasis on the role of faith for a cohesive and sustainable world. We are pleased today to be able to share insights on the mission faith from the experience and wisdom of the Orthodox Church and participate in this crucial conversation for the future of humanity and the world. Faith is a main chapter in the history of culture; culture cannot be understood without taking into account the impact that faith has on it.

Faith can achieve its mission and fulfill its role of cohesion and sustainability through dialogue and witness to the world. Throughout our almost three decades of Patriarchal ministry, we have striven for the promotion of dialogue, which we consider to be the most effective means for addressing problems. Dialogue is a gesture and source of solidarity; it leads to the overcoming of prejudices and mistrust; it promotes mutual familiarization and appreciation; and it builds respect for otherness.

It is tragic that many people tend today to identify religion with terror, war, and intolerance. Almost every day we learn of violence in the name of religion. This tendency to identify religion with its negative aspects is unfortunately reinforced today through the misinterpretations of religion, which circulate especially among progressive intellectuals. Ignorance, intolerance and violence are the failure and not the essence of religion. They are the marks of fundamentalism and extremism, which regard their own ideology and interests as truth that must be imposed upon others. Yet, our conviction – as we have repeatedly declared throughout our tenure – is that any crime supposedly committed in the name of God is actually a crime against God. This is why we work to combat religious fundamentalism – “this expression of morbid religiosity,” as was stated in the Encyclical of the Holy and Great Council of the Orthodox Church (Crete, June 2016, § 17).

In our times, word is made of “the return of God,” expressed as the presence of religion in public space and the definitive annulation of the theory on the impending “post-religious age” and of the total secularization of culture. The famous German philosopher and sociologist Jürgen Habermas, who first characterized contemporary western societies as “post-secular,”[1] stated that political decisions in these societies should not offend the core values and convictions of religious communities, which on their behalf are obliged to respect civil law and human rights, as well as to cultivate interreligious understanding and dialogue.

It is overly utopic to expect that solidarity and social cohesion can be established through globalization, economic progress, improved living standards, science and technology, digital communication and the Internet. A world of peace and justice cannot exist without the contribution of the great spiritual powers of humanity – that is, of religions and their encounter and cooperation. We have also persistently underlined that understanding other people’s beliefs and values is an indispensable precondition of establishing dialogue and coexisting peacefully. Faith strengthens the commitment of human action, and it enlarges our witness for freedom and justice, even providing support to our efforts when they appear to be at an impasse.

This is why, the Ecumenical Patriarchate has pioneered ecumenical organizations, such as the World Council of Churches, and has advocated and advanced bilateral dialogues with non-Orthodox Christians, Muslims and Jews in the Middle East and internationally. Such dialogue does not imply abandoning or betraying one’s belief or tradition, but instead encourages learning to live in solidarity with all people, with whom we share this world. We believe that the appropriate response to our present multifaceted crisis is the development and establishment of a culture of solidarity. Our conviction is nourished by the very essence of the Gospel.

The term “solidarity” points, on the one hand, to the history of struggles for social justice, freedom and dignity, while dynamically expressing the social and political dimension of the term “fraternity” formulated in the triptych of the French Revolution “Liberté – Égalité – Fraternité.” However, it also promotes the idea of law, of social justice and of the social content of freedom as co-freedom, as cooperation for the common good, as co-responsibility for the common home (“οἶκος”). On the other hand, solidarity points to the Biblical fraternity, to the unconditional love and help toward our fellow human beings, promoting the social dimension and expression of true freedom. In this way, the term “solidarity” contains the two unshakeable pillars of humanism: justice and love.

In a culture of solidarity, human rights can function as universal humanistic principles for peaceful coexistence and social justice, representing the “culture of humanity,” while ensuring the “right to difference” on the basis of respect for these universal values, as well as the orientation of social and economic life toward the dignity of the human person. They will serve as humanistic criteria for a more just globalization and as answers to the challenges or new threats to freedom and justice. The culture of solidarity signifies a life, where the “law of the fittest” is not predominant, but instead the strength of law and justice prevails.

In this sense, the Ecumenical Patriarchate declared 2013 as “the year of universal solidarity.” In our Patriarchal Encyclical we articulated the conviction that the ongoing worldwide economic and social crisis ultimately expresses a lack of solidarity. Our aim was to sensitize individuals and peoples to poverty and the great inequalities that exist. We underscored the necessity for initiatives to ensure the right that every human being enjoys the essential goods of life. For us, this immense crisis is a result of a broader spiritual crisis. Humanity needs a renewed culture of solidarity, that transforms our society of “having” into a society of “being.”

Our future is common, and the way to this future is a common journey for us all. No single leader and no single state, no single nation and no single religion, indeed no single science and no single institution can face contemporary challenges alone. We need one another; we need common goals; we need collaborative efforts. We are called to build bridges based on love and understanding, and not to construct walls of division and exclusion based on fear and ignorance. The Ecumenical Patriarchate invites all of you to join in these endeavors.

Unfortunately, the Orthodox Church is often accused of neglecting the world for the sake of its spiritual life; of being centered on worship and liturgy while ignoring social problems; of turning solely toward the future, to the Kingdom of God that is to come, while disregarding contemporary and current challenges. Yet, the exact opposite is the case. For Orthodox believers, faith presupposes and leads to a proper approach to the earthly reality. Faith definitely cannot be confined to the private sphere.

As it has been said, the democratic society “lives from powers, which cannot be created by itself.” According to His Eminence Walter Cardinal Kasper, “every society needs institutions of transcendence,” which represent publicly the “dimension of the Divine.”[2] We believe that all of humanity needs such a grounding as in Plato’s statement that “God is the measure of all things” (Laws, 716 c), formulated against the “homo-mensura” maxim of Protagoras that “man is the measure of all things.” The future does not belong to the self-ordained “man-god,” a new Prometheus, who ignores or abolishes limits and undeniable measures. All attempts to found a just society need some reference to an “Absolutum.” For us, such a central power is Christianity, in which the Biblical tradition, the ancient Greek idea of freedom and political humanism and the Roman culture of justice have found a creative synthesis.

In this spirit, we are very sceptical about the characterization of contemporary Europe as a “post-Christian Europe.” Europe’s secularized present cannot be separated from its past, which is inspired and formed by a cultural heritage centered around Christianity. We must accept that the retreat of this Christian consciousness in Europe ultimately has a negative impact on Europe’s identity and self-understanding.

The year 1989 marked worldwide the end of the period of the Cold War. However, it was not the “end of history,” in the sense of the already certain and stable global dominion of the “market economy,” or of the prevalence of freedom and prosperity according to the model of Western democracies, characterized by philosopher Karl Popper as the best politico-social systems, which mankind has ever experienced in its historical trajectory.[3] The old rivalries were replaced by the rise of a polycentric world, marked by the emphatic consciousness of cultural diversity and the potential clashes among civilizations, within the environment of globalization.

What was the public role of religion during these thirty years after the great change? It is a fact that religion was a factor, which influenced developments, both local and global, in an ambivalent way. Today religions are called to develop and give prominence to their peace-making power and humanistic principles, their precious spiritual and moral heritage, as well as their deep anthropological knowledge, all of which strengthen our engagement with and struggle for the protection of human dignity. Faith and religion can play a vital role in raising awareness, advancing dialogue and fostering collaboration among people on contemporary global challenges.

And what is the place and role of the Orthodox Church in face of the current crisis? In many geopolitical contexts worldwide, Orthodoxy was, is, and will continue to be a minority religion with a universal message and a legacy of a long-standing historic presence. In regions such as the Middle East, South-Eastern Europe, and the Balkans, the Orthodox Christian faith has shaped the religious landscape for centuries, or even millennia. The challenges in this context are real and urgent. In the Middle East in particular, the survival of Christianity hangs in the balance. During the war in Syria and the uprising of the so-called “Islamic State,” news reports and articles regularly reminded us of the reality of Christians in the Middle East and their continuous struggle to survive in the very region where Christianity was born. It is important for us here to understand that these Christians are more than just a historical link to the world of the Gospel. They are the heirs to a unique spiritual and cultural legacy and symbol for the value and respect of religious diversity worldwide.

Faced with the contemporary international and globalized crisis, all faith communities must renew their message, functioning as a positive challenge to individuals and peoples, and offering an alternative model of life within a globalized culture, which bestowed humanity with precious gifts, but at the same time seems to push people to live for themselves, ignoring the others, with whom they have to share the world. In this sense, the faithful can become more humanist than humanists themselves, because the struggle for social cohesion and the protection of the integrity of creation is not just a moral imperative, but a commandment of God.