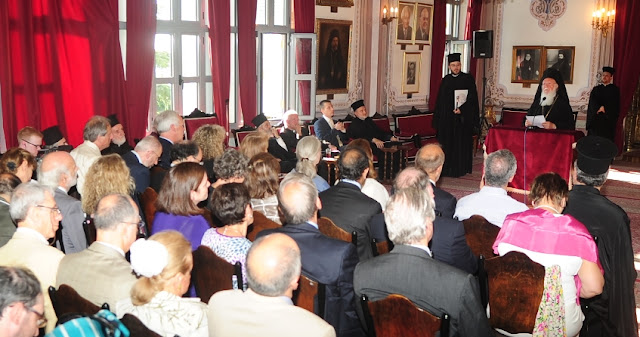 The world will continue to face an unabated risk of an irreversible environmental disaster unless there is a fundamental change in the collective human heart, warned His All Holiness the Ecumenical Patriarch at a gathering of distinguished environmentalists, scholars, entrepreneurs and activists, which he convened on the island of Heybeliada/Halki from June 18th-20th.
“The real crisis is not in the environment but in the human heart,” said His All-Holiness as he opened the gathering, known as the Halki Summit and co-organized by the Ecumenical Patriarchate and Southern New Hampshire University. It was the latest green initiative by the Ecumenical Patriarch, whose activities over the past two decades have included five educational seminars on Halki island, site of a famous monastery and theological school, and eight water-borne symposia in places ranging from Brazil to Greenland.
His All-Holiness expressed his gratitude to the co-sponsor of the summit, Southern New Hampshire University, which is the first carbon neutral campus in the state of New Hampshire and nationally recognized for its innovative programs in the Unites States. President Paul LeBlanc commented: “A central role of universities is to convene expert people around complicated and critical questions, and no more important question faces us than the fate of our planet.”
Jane Goodall, the East Africa-based conservationist and founder of a green movement that operates in over 130 countries, said she had come to the Halki summit to drive home her belief that “every individual makes a difference every day of life, and we have a choice as to what sort of difference we make.”
Jim Hansen, president of the NASA Institute for Climate Change, called for religious leaders to renew their engagement with a global environmental challenge which was steadily growing in gravity. “We cannot ignore the consequences of continued unchecked exploitation of fossil fuels without creating a tragedy of monstrous proportions,” he said.
Other keynote speakers included Bill McKibben, founder of the global climate protest movement 350.org, and Gary Hirschberg, founder of the organic yoghurt company Stonyfield Mountain.
Closing the summit, His Eminence Metropolitan John of Pergamon, said the gathering had marked a new milestone in a dialogue between religion and science, which had shown up a deep interdependence between the two fields of knowledge. “Religion and science do not complement one another, they interpenetrate one another,” he said, while calling for an intensified effort to promote environmental awareness at all stages of education. For further information, visit www.halkisummit.org.